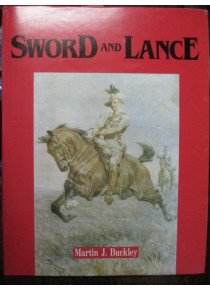 Sword and Lance by M. Buckley ﻿

The military history book begins during 1885, when Captain H G Chauvel who was also a farmer in the district, was instructed﻿ to form two troops of the Upper Clarence Light Horse.﻿ His son Harry Chauvel (World War I Light Horse Commander fame) also became a member of the troop being commissioned as a 2nd Lieutenant.
﻿
1. Troop at Tabulam also known as the Tabulam Mounted Infantry.
2. Troop at Casino also known as Richmond River Light Horse later forming with Lismore the 4th Squadron of the New South Wales Lancers﻿
This is a highly detailed historical account of the Northern Rivers Lancers during the period 1885 to 1903. There is a 35 page story of the activities of members that went to the Boer War including nominal roll of the 4th Squadron men who served in South Africa. Also a page dedicated to the regimental badges and buttons of the Lancers.
Chapter 15 the last chapter, is a Summary of Events after 1903 which refers to the members who continued on in other wars with many photographs of the ex-members in later life.

The book concludes with several lists of members also including names that appeared on many patriotic memorials and various scrolls of honour throughout the Northern Rivers district﻿.

The book is supported with a huge quantity of period photographs of members and activities.﻿

A great collectible book for researchers of information regarding WW1 Light Horsemen service prior to the Great War.﻿