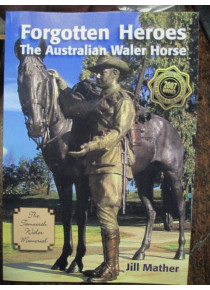 This is the story of the famous Australian Waler Horses predominantly used by the Australian Light Horse during World War I. Both the Boer War and World War I necessitated thousands of these animals being shipped overseas. The story of the development from a stock horse to a fully fledged warhorse is historically significant and is without equal in modern times.

So often forgotten, yet the Waler Horse contribution was considerable to the Australian war effort. This book answers many interesting and intriguing questions, the facts about which have virtually been forgotten.
For example, how does one look after hundreds of horses picketed row after row in horse lines. The logistics of looking after all these horses is quite complex.
Who supplied the Saddlery?
What happened to the refuse?
Who looked after injured and sick horses?
Where did the food come from?
What were the remounts units?

Several of the important war / battles throughout Australian history are covered in this book. Sudan, Boer War, Beersheba, a special chapter about the 5th Light Horse at the Battle of Romani, Forward on to Palestine all receive mention. Also related topics such as the Dorothy Brook Hospital, the Indian Waler connection - just some of the interesting warhorse stories.﻿

These wonderful stories do not just stop with World War I but continue within the book with up-to-date chapters about the year 2000 massacre at the Guy Fawkes National Park of Bumbies. These horses are thought to be remnants of the original famous Waler Horse.

Several conclusion chapters are devoted to the current effort of saving the wild Bumbies - The Forgotten Heroes.﻿