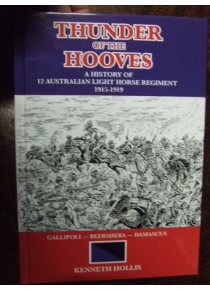 THUNDER OF THE HOOVES A HISTORY OF 12th LIGHT HORSE REGIMENT 1915-19' by K Hollis. New Book

12th Light Horse ALH Book  THUNDER OF THE HOOVES A HISTORY OF 12th LIGHT HORSE REGIMENT 1915-19' by K Hollis. The author, was at the time of writing, a serving member in the Australian Army. Hollis was mindful that the History of the 12th LightHorse had never been written. In creating this record he has drawn on official histories, war diaries and the personal reflections of original members of the Regiment. The greatest distinction earnt by the regiment was without doubt the Battle Honour of the Charge of Beersheba. At Beersheba the Regiment led the Charge and thus sustained higher casualties. After Beersheba the Regiment took part in the advance onto Damascus.

A full member nominal roll by Squadron is included in this History. Gallantry award citations and the Beersheba report are shown.

Importantly, also included is a Regimental photo album. A well written history with detailed text and many b&w Illustrations.A prime source for genealogists and military historians. 12th Light Horse medal or genealogy research. Stories of Regmental identities abound including the waler horses the most famous being Midnight.