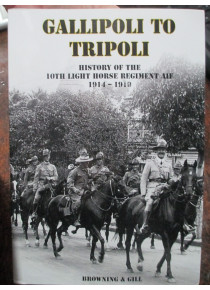 The 10th Light Horse epitomises the dash of the mounted Australian trooper in World War One . This the second History to be written about the 10th Light Horse Regiment the first 'WESTRALIAN CAVALRY IN THE WAR. The Story Of The Tenth﻿ ' by A C N Olden DSO ﻿was published in 1919. This all new regimental history seeks to complement and add to Arthur Olden's earlier history. The authors have sought to shed new light and information on the operations of the 10th Light Horse Regiment, from it's formation in Perth during October 1914 until the end of the Great War.

The 10th ALH went to the Gallipoli campaign as unmounted troopers. The Regiment’s most famous actions were the charge at the Nek on 7 August 1915, and Hill 60 on 29–30 August. Probably the 10th ALH Charge At The Nek is the most well known battle scene of the whole AIF thanks to the Peter Weir ’s Gallipoli film starring Mel Gibson.﻿ It was this Light Horse Regiment that the fictional characters were members.

Following this campaign the men were reunited with their horses in Egypt, going on to serve in the Middle East in Sinai, Palestine and Syria, followed by the Egyptian Uprising in early 1919.

The narrative is divided across these two very distinct episodes in the Regiment's history, with each author covering in their own styles, the Gallipoli and Middle East campaigns.

There are hundreds of photos, both in the narrative and in the photo chapter in the back of the book. Numerous appendices allow for the book to become an important research tool when studying this fine West Australian regiment of light horse. It is hoped that this book will sit well alongside all the other regimental histories, both old and new on the men of the Australian Light horse.