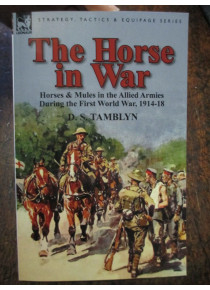 The Horse in War WW1 Book

The author Lt. Col David S. Tamblyn was a Veterinary﻿ Surgeon who served in both the Boer War and WW1 with Canadian forces. ﻿
This book although retitled, is a reprint of the original first published in 1920. The original title was "The Horse in War and Famous Canadian War Horses". An excellent complementary read comparing to the many Australian publications available about the warhorse.﻿

The role of the ‘war horse’ particularly during its twilight years in the First World War has recently become the focus of much interest. All armies have used horses in wartime as cavalry and mounted infantry, as officers chargers, for artillery or for transport and supply. Some large nations, because the horse formed a central role in its domestic life, became more associated with horses and horsemanship in the period when mechanised transport was making its first appearance onto the field of conflict. All the countries of the British Empire and Commonwealth the accomplished riders of Australia, New Zealand and, especially noteworthy, Canada—the home of the author of this book.

Naturally, the author is concerned with the activities of the Canadian Cavalry Brigade, but his book examines in detail the role of horses in every aspect of the Great War.

He was not oblivious to the suffering of horses in war though, he clearly demonstrates a great affection for them in their military role. The book concludes with pictures and vignettes of individual horses of renown in the Canadian Army and a short piece on the service of dogs.