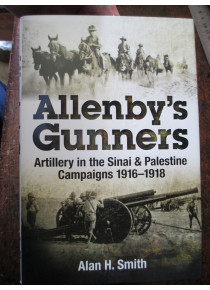 History of Artillery with the Australian Light Horse WW1

‘Allenby’s Gunners’ would be a valuable addition to any Light Horse book collection. This is a history of the artillery units which supported the Australian Light Horse during World War I in the Sinai and Palestine campaigns. It is written in chronological battle order - a chapter being devoted to each of the Australian battles. A highly detailed narrative is supported with maps of the battles.

﻿Battle of Romani
Battle of Magdhaba
Battle of Rafa
First Battle of Gaza
Second Battle of Gaza
Third Gaza
Battle of the Beersheba
The Taking of Jerusalem
Northern Front and Defence of Jerusalem
Capture of Jericho
The Amman Raid
Summer in the Jordan Valley
Battle of Megiddo
Damascus and Aleppo
the book concludes with several appendices which provide Orders of the Battle and guns being used.
Statistical information including ammunition expenditure.﻿