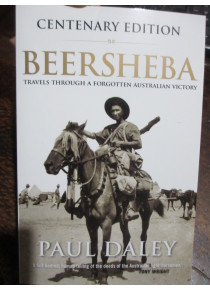 Beersheba History of the Lighthorse Battle for Beersheba 1917

Beersheba: A Journey Through Australia's Forgotten War by P. Daley

This war book is a History of the Battle for Beersheba 1917 and the regiments that took part in the Famous Lighthorse Charge.

In October 1917 members of the 4th Australian Light Horse Brigade took part in what is now know as the 'last great cavalry charge'. Waving bayonets overhead, they charged across six kilometers of open ground, cheating bombs, shells and bullets before capturing, in a desperate hand-to-hand battle, the Turkish trenches that held the key to the strategic stronghold of Beersheba.

The charge was the last daring act of a day-long fight by combined British forces to capture Beersheba, and also a turning point in Britain's war against the Ottoman Empire, sending Turks fleeing north to ultimate defeat.