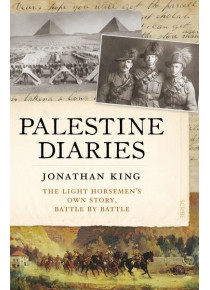 Palestine Diaries The Light Horsemen's Own Story, Battle by Battle

Palestine Diaries The Light Horsemen's Own Story, Battle by Battle
by J King

These are the stories from the mouths of the Lighthorsemen who were the first to achieve incredible WW1 battle victories for Australia - ahead of the Western Front, and unlike the defeats of Gallipoli.

These young Australians helped demolish the centuries-old Ottoman Empire by driving the Turks from the strategic Suez Canal across the Sinai, and up through Palestine, Jordan, and Syria to be first into the enemy stronghold of Damascus - a victory that would not only change the course of the war, but would also plant the seeds of the modern Middle Eastern conflicts.﻿