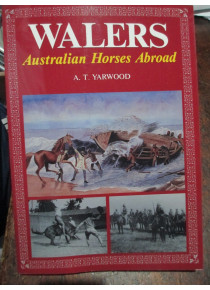 It was in colonial Calcutta India that the term 'Waler' was first used to describe horses imported from New South Wales. The author, A.T. Yarwood tells the story of these part-thoroughbred horses and of the men and women who rode, bought, sold and shipped Walers across the world. A lively, fascinating and detailed history.

A chapter is devoted to the Waler at War, the Australian horse had become noted for its great endurance and use during war operations. The Waler was first used as a warhorse with the dispatch of the New South Wales contingent to Sudan in 1885. Later in World War I, the Waler horse become legendary as the regimental mount for the Australian Light Horse.