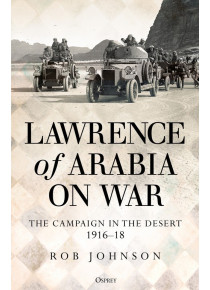 A new study of Captain T. E. Lawrence's ideas on warfare and the context of his military campaign, as well as the peace settlement and the legacies that followed.﻿

Lawrence of Arabia is one of the most iconic figures of the First World War, seen by many as a heroic and romantic guerrilla leader in a period of savage and deeply impersonal industrial warfare. While Lawrence himself has been the subject of many biographies, and an award-winning film, the context of his war in the desert, and his ideas on war itself, are less well known.
Lawrence of Arabia on War is a study of those ideas, and of his campaign of irregular warfare which has informed tactical theory and decision-making down to the present day. It explores the challenges he faced in a complex environment against a more numerous and better armed adversary, and the manner in which he assessed what was changing, what was distinctive, and what was unique to guerrilla warfare in the desert. Setting Lawrence in his historical context, it examines the peace settlement he participated in, analyses how other military writers made use of his ideas, and describes the ways in which his legacy has informed and inspired those partnering and mentoring local forces today.﻿