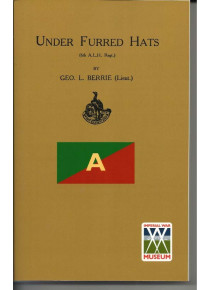 This military book titled UNDER FURRED HATS - 6th Australian Light Horse Regiment.' was written by G.L.Berrie. Berrie joined the 6th Light Horse on the 19/1/1915, his enlistment number being 724. On the 20/5/1915, he landed onto Gallipoli ANZAC Cove with the Regiment. He stayed with Regiment the entire war being promoted to Lieutenant on the 9/3/1918. This History was compiled and written by Berrie in 1919. The book first being published in 1919.

The book being offered is a professionally produced reprint of that history.

It is a true reproduction of the 1919 1st edition. Even these reprints escalate in value when they become out of print. Here is your chance to obtain this book that can be treasured as a hand me down Family History Book.

Follows the 6th ALH history from its formation in Sydney.
Training in Egypt, landing on ANZAC Gallipoli and the many Battles during the
next 4 years in the Middle East - Battle of Romani , advance into Palestine,
the action at Beersheba , the raids into the Jordan Valley (see battle honours
below). Detailed text with 40 b&w pic Illustrations. Has individual named
casualty roll/lists from Gallipoli Sinai and Palestine battles.