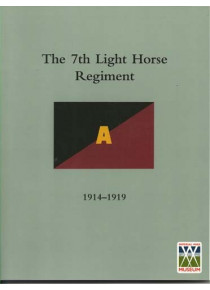 HISTORY OF THE 7th LIGHT HORSE REGIMENT A.I.F.' by Lieut-Colonel
J.D. Richardson D.S.O.. The author was C.O. of the regiment. His History is
presented in four parts, formation in NSW in 1914, ANZAC through to the evacuation
from Gallipoli, operations in Sinai, the operations around Gaza, Beersheba and
Jaffa, and then finally the advance to Jerusalem and Amman. This is an authoritative
work, written soon after the events which it describes. Lists of personnel and
references to individuals appear throughout the text. This History was compiled
and written by Richardson in 1919-23. The History first being published in 1924.
This book being offered is a professionally produced reprint of that history.
It is a true reproduction of the 1924 1st edition. Even these reprints escalate
in value when they become out of print. Here is your chance to obtain this book
that can be treasured as a hand me down Family History Book. Follows the 7th
ALH history from its formation in Sydney as part of the 2nd Light Horse Regiment.
Detailed text with b&amp;w pic Illustrations MAPS. Includes Roll of Honour,
Roll of Honours Awards. Roll of members wounded.