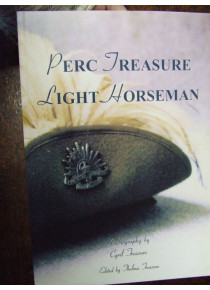 This war book is a collection of information about the Light horsemen from and around Cowra. Great history pictures of Light Horse members in later life.

Perc Treasure Light Horseman ' light horse book by C Treasure.
On the 22 August 1914 Percy Henry Treasure enlisted with the 1st Light Horse Regiment AIF .
Treasure was from Cowra in the Central West of New South Wales. This book is full of interesting stories relating to Trooper Treasure and his life in the 1st Light horse and some other fellow Cowra contingent men. Also follows his involvement with other LHR such as the 6th LHR as WW2 approached. Other war military exploits with the 6th LHR. This book records pictires and story of many other Light Horsemen - see pictures.
Lest We Forget his Service to Australia....