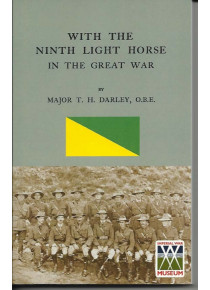 WITH THE 9th NINTH LIGHT HORSE IN GREAT WAR'

WITH THE NINTH LIGHT HORSE IN THE GREAT WAR'
by Major T H Darley.

The author, was an original 1914 Officer with the 9th Light Horse.
He was Quartermaster of the Regiment for his service he was mentioned in despatches twice, awarded the MSM and received an OBE.
The History was first published in 1924.
This book being offered is a professionally produced reprint of that history. It is a true reproduction of the 1924 1st edition. Even these reprints escalate in value when they become out of print.

Here is your chance to obtain this book that can be treasured as a hand me down Family History Book.

Follows the 9th ALH history from its formation in Adelaide
through to it being disbanded in 1920 after the Turkish surrender in October 1918.
In between there are 200 pages of information about the men, battles and times that made up the history of the famous 9th LHR.
The Regiment had the distinction of capturing the only Turkish unit Colour to be taken in the Middle East campaign.
Roll of Honour (with ranks, dates and cause of death).
A well written detailed narrative, with b&w Illustrations.﻿