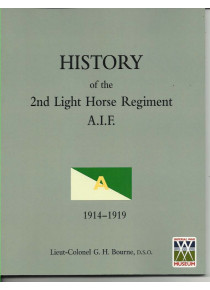 Bourne joined the 2nd Light Horse on the 18/8/1914. On the 12/5/1915, he landed onto Gallipoli ANZAC Cove with the Regiment. He stayed with Regiment the entire war being promoted to Lieutenant Colonel. He was awarded the D.S.O. for conspicuous gallantry in action. He held an outpost line against heavy odds for four hours. Then gradually and skillfully withdrew. A few days later he held the extreme flank with great determination at a crucial time. On the 30/6/1916, he began his command of the Regiment.

This History was compiled and written by Bourne in 1920. No doubt Bourne was a hero of the 2nd Light Horse and best qualified to write the book. The History was first published in 1921.

The book being offered is a professionally produced reprint of that
history. It is a true reproduction of the 1921 1st edition.

Follows the 2nd ALH history from its formation in Brisbane.
Training in Egypt, landing on ANZAC Gallipoli defense of Quinns and the many Battles during the next 4 years in the Middle East - Battle of Romani , advance into Palestine, the action at Beersheba , the raids into the Jordan Valley (see battle honours below).

It was an honour of the 2nd ALH that they instigated the introduction to the AIF of the Emu Plume as a Lighthorse tradition.