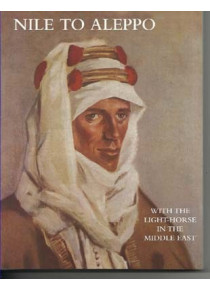 NILE TO ALEPPO With the Light-Horse in the Middle East ' by H.W.Dinnings﻿

NILE TO ALEPPO With the Light-Horse in the Middle East ' by H.W.Dinnings. Dinning was from Maryborough in Queensland. He was a school teacher who joined the Light Horse on the 28/9/1914. He landed on Gallipoli with the 9th AASC (Supply Corps for Light Horse). He served with his unit in the Palestine campaign, journeying from Cairo in Egypt to Aleppo
in Syria and recounts his experiences in the Middle East. This book will especially interest
anyone researching T.E.Lawrence ‘of Arabia' as Dinning on occasion worked alongside
the legendary Lawrence - he has dedicated a chapter on Lawrence.
Later he joined the Light Horse Historical Records Section. A valuable reference
for genealogy research for any family members that served in any of the regiments
of the Australian Light Horse during its greatest moment. ﻿