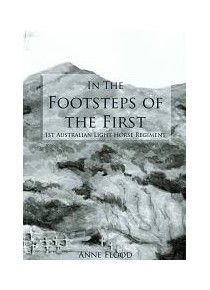 In The Footsteps of the First : History 1st Australian Light Horse Regiment

In The Footsteps of the First –
Diary History of the 1st Australian Light Horse Regiment Gallipoli﻿ by A. Flood : New Book

‘In the Footsteps of the First’ this book is written by Dr Anne Flood whose grandfather Fred Wood of Glebe NSW was a Trooper (Driver) No.67 with the 1st Light Horse Regiment Machine Gun section. Fred was wounded on Gallipoli along with his mate Herb Puckett No. 53 of Yass, NSW. Remarkably, both were reported hit by a single gunshot whilst working in pairs as sharpshooters on a night patrol in Monash Valley Gallipoli.
The first of two volumes, this book is the War Diary History of the Regiment from its formation at Rosebery Park in Sydney during August 1914 to the end of the Gallipoli campaign. The 1st Light Horse was one of three regiments of the 1st Light Horse Brigade - the first mounted formation committed by Australia to the First World War. Members came from many regions in NSW including Hunter Valley, North-Western NSW, Central West, North and South Coast and the Riverina. Men from the towns of Cowra, Wagga, Tumut, Yass, Gundagai, Adelong, Cootamundra, Cooma, Batlow, Albury, Harden, Murrumburrah, Deniliquin were well represented in the ranks of the 1st Light Horse Regiment.
The regiment sailed from Sydney on 19 October and disembarked in Egypt on 8 December.

The Regiment landed at Anzac on 12 May 1915 and was attached to the New Zealand and Australian Division. It played a defensive role at Pope’s Post and No.1 Outpost for most of the campaign. The Regiment mounted a courageous attack on the Turkish position known as “the Chessboard” as part of the August Offensive on 7 August 1915 - 200 men were involved, 147 became casualties.
The book tells the story of such men as Captain James Reid of Tenterfield, NSW who, in the words of WW1 Historian Charles Bean, led ‘A’ Squadron on the August 7 attack at The Chessboard [and] “being hit in the right hand, changed his revolver to his left, and, although entreated to go to the rear, continued to lead his men. He was last seen amid the bomb-smoke in the enemy trench.”
Lieutenant Geoff Harris from Tumut, led his troop into the attack on The Chessboard on 7 August and, although wounded continued to lead his men. He was awarded The Military Cross.

The regiment left Gallipoli on 21 December 1915.

‘In The Footsteps of the First’ is an admirable Memorial to the brave Troopers of that fine Light Horse Regiment. A Honour Roll﻿ and an original member﻿ Nominal Roll  completes this valuable addition to the Australian Light Horse history. Each day entry records apart from operations the names and details of every man who paid the ultimate price on the day. ﻿