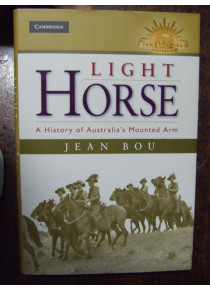 The mounted soldier is one of the most evocative symbols in Australian military history. Now a celebrated part of Australia's army heritage, the role and very existence of mounted troops in modern warfare was being called into question at the time of its most crowning military moments. Light Horse regiments, particularly those that served in South Africa, Palestine, and the trenches of Gallipoli, played vital roles in Australia's early military campaigns.

Based on extensive research from both Australia and Britain, this book is the first comprehensive history of the Australian Light Horse in war and peace. Here historian Jean Bou examines the place of the Light Horse in Australia's military history throughout its existence, from its antecedents in the middle of the nineteenth century, until the disbandment of the last regiment in 1944.