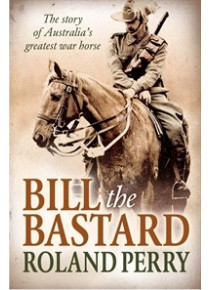 Australian War Horse who rode with bravery and valour at the desert campaigns of Egypt, and Palestine.﻿
Based on the true story of a great Australian Waler﻿ War Horse, ‘Bill the Bastard,’﻿﻿ he was the mount of Major M. Shanahan 2nd Australian Light Horse Regiment﻿. ‘Bill the Bastard,’ a gelding, gained his name due to a habit of bucking when asked to gallop. During World War I at the Battle of Romani on the 3rd August 1916, Major M. Shanahan﻿ was mentioned in dispatches for valour. After holding ground against opposing Turkish forces, Major Shanahan found four unmounted Australian Troopers outflanked by the Turks, ‘Bill the Bastard’ carried all five men – three on his back and one on each stirrup - three quarters of a mile .75 miles (1.21 km) through soft sand at a lumbering gallop. ﻿

Bill was a massive horse. He had power, intelligence and unmatched courage. In performance and character he stood above all the other 200,000 Australian horses sent to the Middle East in the Great War. But as war horses go he had one serious problem. No one could ride him but one man - Major Michael Shanahan. Some even thought Bill took a sneering pleasure in watching would-be riders hit the dust. Bill the Bastard is the remarkable tale of a bond between a determined trooper and his stoic but cantankerous mount. They fought together. They depended on each other for their survival.
By September 1918, 'Bill the Bastard' was known by the entire Light Horse force, who used his name not as an insult, but as a term of endearment. Bill had become a legend, a symbol of the courage and unbreakable will of the Anzac mounted force. There was no other horse like Bill the Bastard.﻿

Read Further now about the Australian Waler Horse of WW1