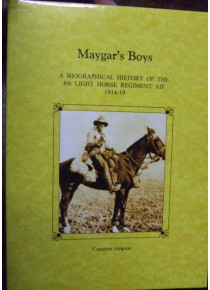 The Light Horse were considered unsuitable for the initial operations at Gallipoli, but were subsequently deployed without their horses. The 3rd Light Horse Brigade landed in late May 1915 and was attached to the New Zealand and Australian Division. The 8th formed the first two waves for the Brigade’s disastrous attack on the Nek on 7 August and suffered heavily. Exhausted and under-strength, the regiment then played a defensive role until it finally left the peninsula on 20 December 1915.

Back in Egypt, the 3rd Light Horse Brigade became part of the ANZAC Mounted Division and, in March 1916, joined the forces defending the Suez Canal from a Turkish drive across the Sinai Desert. The Turks were turned at Romani. Although it didn’t take part in the actual battle, the 8th Light Horse participated in the advance that followed the Turks’ retreat back across the desert.

By December 1916, this advance had reached the Palestine frontier and the 8th was involved in the fighting to secure the Turkish outpost of Maghdaba on 23 December, which was captured at bayonet point. The next Turkish stronghold to be encountered was Gaza. The 3rd Light Horse Brigade, now part of the Imperial Mounted Division (later re-named the Australian Mounted Division), was involved in the two abortive battles to capture Gaza directly (27 March and 19 April 1917) and then the operation that ultimately led to its fall - the wide outflanking move via Beersheba that began on 31 October.

With the fall of Gaza on 7 November 1917, the Turkish position in southern Palestine collapsed. The 8th participated in the pursuit that followed and led to the capture of Jerusalem in December. The focus of British operations then moved to the Jordan Valley. In early May 1918 the 8th was involved in the Es Salt raid. It was a tactical failure but did help to convince the Turks that the next offensive would be launched across the Jordan.