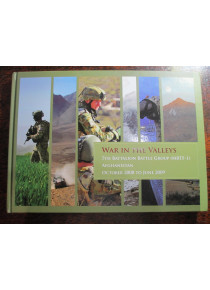 War in the Valleys﻿

This Book is the Record of the Australian Army's  first Mentoring and Reconstruction Task Force during its deployment to Afghanistan﻿.

In February 2008, as part of the Australian Defence Force's commitment to Operation Slipper,﻿﻿ the 7 RAR Battalion was warned to form a combined arms battle group for operational deployment to Uruzgan Province in Afghanistan.

The book is profusely illustrated by private and professional photography.﻿

A Nominal Roll concludes the volume.﻿

As these books are not publicly available and are supplied to members only they have become sought after for military book collections.﻿
﻿

5 other products in the same category: