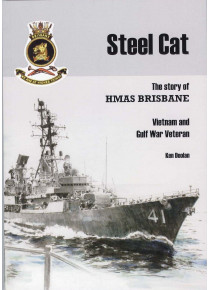 This Australian Navy Book is authored by Rear Admiral Ken Doolan AO who during his naval career was the commander of the HMAS Brisbane. His most senior command being Maritime Commander Australia and operational commander of all Australian combatant forces deployed to the Gulf War.﻿ HMAS Brisbane was the third and last American built guided missile destroyer acquired by Australia in the mid 1960's.

The warship has the unique distinction of being the only Australian destroyer to have been deployed on active service to two major conflicts during the second half of the twentieth century.  She was assigned for active serice in the Vietnam War in 1969 and again in 1971.

Twenty years later Brisbane was the only Australian destroyer sent to the Persian Gulf during the 1990/1991 Gulf Crisis and Gulf War.﻿

The Bridge of HMAS Brisbane forms a display in the Conflicts 1945 to today galleries of the Australian War Memorial.

The rest of Brisbane was decommissioned in 2001, and was sunk as a dive wreck off the Queensland Sunshine Coast in 2005.﻿