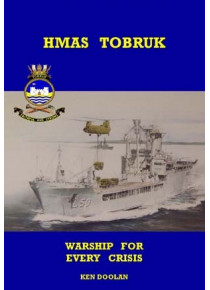 HMAS Tobruk - Warship for Every Crisis  by K Doolan

This Australian Navy Book is authored by Rear Admiral Ken Doolan AO who during his naval career was the commander of the HMAS Tobruk. His most senior command being Maritime Commander Australia and operational commander of all Australian combatant forces deployed to the Gulf War.﻿