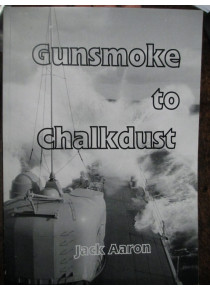 Gunsmoke to Chalkdust Recollections of a Naval Career by Jack Aaron

﻿An illustrious career, during which he served on HMAS Anzac, HMAS Voyager and was present on HMAS Perth II from her commissioning in July 1965. He was one of the original seaman to bring HMAS Perth back to Australia where she was warmly welcomed as Australia's first Guided Missile Destroyer. Then followed Vietnam War service coming under enemy fire on four separate occasions.

A large book of some 300 pages, would be of immense interest to anyone who had relatives serving on the above-mentioned ships.﻿