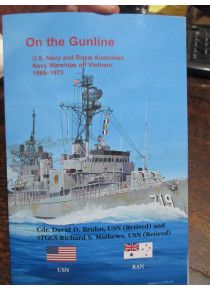 On the Gunline U.S. Navy and Royal Australian Navy Vietnam

During the Vietnam War, 270 U.S. Navy and four Royal Australian Navy warships served at various times on the gunline. Within this armada were the battleship New Jersey, ten cruisers, 212 destroyers, fifty destroyer escorts, and the inshore fire support ship Carronade. When necessary, naval guns poured out round after round, until their barrels overheated and turned red, exterior paint blistered, and rifled-barrel liners were worn smooth.

Allied troops locked in battle with North Vietnamese Army or Viet Cong troops in South Vietnam were grateful for artillery support from the sea. When North Vietnam launched the Easter Offensive across the DMZ in 1972, eight to ten ships in line, abreast, often firing simultaneously and around the clock, delivered desperately needed fire support. At one point, over forty cruisers and destroyers were serving together on the gunline. Warships conducting SEA DRAGON and LINEBACKER operations--naval bombardment of military targets along the coast of North Vietnam--came under fire on a number of occasions.