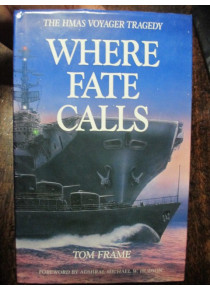 Where Fate Calls the HMAS Voyager Tragedy ' by Tom Frame.

Where Fate Calls the HMAS Voyager Tragedy ' by Tom Frame.

On the evening of 10 February 1964, the two ships were performing manoeuvres off Jervis Bay, when Voyager sailed under Melbourne's bow. She was cut in two and sunk, 82 of her crew killed.

This is a large book investigates the collision from every possible angle.
Maps photos complement the details text.