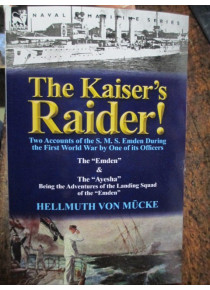 Kaiser's Raider Accounts of the Emden from German Officers WW1

The Kaiser's Raider two accounts of the SMS Emden during World War One by H Mucke : new book

Two classics of WW1 about the German ship Emden

The author of this book, von Mücke wrote two accounts of his naval experiences in the Imperial German Navy during the First World War and both are brought together in this special Leonaur edition. Mücke was the executive officer and first lieutenant on the light cruiser SMS Emden. The Emden raided commercial shipping from her base at Tsingtao, China, into the Indian Ocean. After a four month raiding spree she was finally discovered and destroyed by the Australian Navy light cruiser Sydney. Prior to the arrival of the Sydney, von Mücke, commanding a 53 man landing party had gone ashore on Direction Island in the Cocos group to disable a wireless station and from there witnessed his ship’s demise. Upon realising his small command was cut adrift, von Mücke seized the schooner Ayesha and began an epic 11,000 km journey of escape across sea and land. Mücke’s writings are essential reading for anyone interested in the Imperial German Navy and true stories of high adventure at sea.
Leonaur editions are newly typeset and are not facsimiles; each title is available in softcover and hardback with dustjacket; our hardbacks are cloth bound and feature gold foil lettering on their spines and fabric head and tail bands.﻿