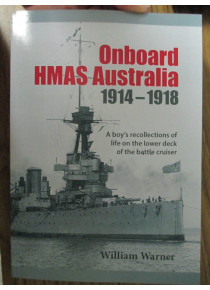 A Boy Sailor's recollections of life training on the Tingara and on the lower decks of the battle cruiser Australia during WW1.

William (Bill) Warner was only 15 years old when he joined the crew of the Australia. He spent the majority of the war years on the Battle Cruiser.