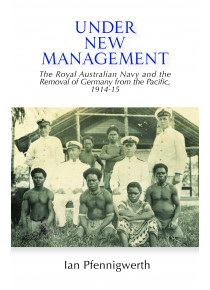 Under New Management The Royal Australian Navy and the removal of Germany from the Pacific, 1914-15 by I Pfennigwerth

Under New Management book details the events at the start of World War One when Germany had colony in New Guinea. The British Government requested that Australia immediately destroy the German radio stations located within the colony.

Along with the Australian Navy, an army of 1500 men (mostly infantry, with machine-gun sections and medical detachment) were raised from volunteers. This force was to undertake the attack. It was called the Australian Naval and Military Expeditionary Force (ANMEF).

Subsequently an attack was carried out at Bita Paka and the German radio outposts were captured. Book also describes events after the capture and the elimination of all German forces within the territory. It has a strong emphasis on the Royal Australian Navy,  as the author was an officer in the RAN for 35 years

The book concludes with a schedule of details of ships which took part in the conflict.