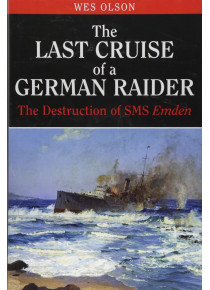 THE LAST CRUISE OF THE EMDEN - HMAS SYDNEY

THE LAST CRUISE OF A GERMAN RAIDER.  by W Olsen

THE LAST CRUISE OF THE GERMAN RAIDER. The story of the German cruiser Emden that, at the beginning of the First World War, patrolled the waters of the Far East unaccompanied and sank some twenty merchant ships, a cruiser and a destroyer. The subsequent sinking of the Emden by the Australian Heavy cruiser Sydney was an momentous event to Australia's esteem back in 1914. At the time it was recognised as the single most important military event to happen to Australia. Then came Gallipoli .

One of the most concise books written on the HMAS Sydney WW1 battle.

Has a name list of the Ship's Company of both HMAS Sydney and the Emden - denoting killed in action and wounded.