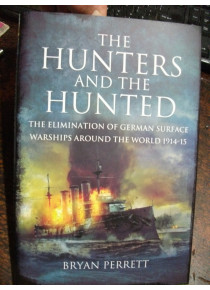 At the start of World War One the Imperial German Navy had a large number of surface warships deployed around the world. These posed a considerable threat to British mercantile interests, particularly the import of food and fuel supplies.

Their elimination was a matter of urgency. This book covers the major actions and includes the following:

The escape of the Goeben and Breslau to Turkey, where they became units of the Turkish Navy serving in the Black and Aegean Seas. The remarkable cruise of the Emden. Detached from the German East Asia Squadron she sank a Russian cruiser, a French destroyer, 21 merchant ships and destroyed cargo valued at GBP3 million. She was cornered and sunk by the Australian cruiser Sydney while raiding the Cocos Islands. The mystery of the Karlsruhe, destroyed by an internal explosion.

The German East Asiatic Squadron, consisting of the armoured cruisers Schanhorst and Gneisienau and several light cruisers made passage across the Pacific to the west coast of South America where they encountered and sank two British cruisers, the Monmouth and Good Hope. The Konigsberg operated from Germany's colony of Tanga. After sinking a British cruiser she hid in the upper reaches of the Rufiji River. After a lengthy naval and air campaign by British forces she was finally destroyed by the indirect fire from two RN Monitors. By the middle of 1915 the high seas had been mostly cleared of German surface warships, but two armed German ships dominated Lake Tanganyika. Two British armed motor boats were shipped to the West African coast from England and made their way by river and overland haulage to the lake, a 400 mile journey. The result was the destruction of the German lake boats and the invasion of Tanganyika by British forces.

This operation became the inspiration for CS Forester's novel The African Queen and the film that followed.

The detailed narrative is supported with 30 mono plate section