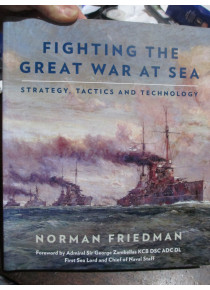 FIGHTING THE GREAT WAR AT SEA Strategy, Tactics and Technology

$49.00
FIGHTING THE GREAT WAR AT SEA Strategy, Tactics and Technology by N Friedman

A tour de force by one of the leading naval historians. The Great War was the first industrial war in history, introducing significant new technologies and total war, on land, in the air and at sea.

The German use of submarines led the Royal Navy to develop new and effective forms of antisubmarine warfare, including the use of escorted convoys and the use of airships to provide a new form of additional escort for coastal convoys. Commerce raiders proved a special threat to the long sea lanes of the British Empire and led to task groups to hunt down the raiders.

To counter U-boats the British built Q-Ships that, like the German commerce raiders, were innocuous merchant vessels with a heavy armament and special buoyancy to survive torpedo strikes and encourage the U-boat to surface, to be destroyed by the heavy covert armament.