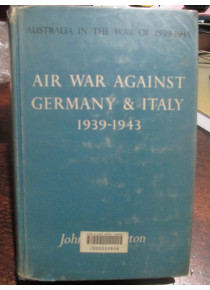 AIR WAR AGAINST Germany & Italy 1939-1943' by J Herington 100% Australian perspective. Series 3 Volume 3 of the Australian War Memorial's Official History of Australia's involvement in World War Two. Seems to also list the activity of the RAAF in Africa. In 1939, there was one Australian Sqn in England and there were some 400 Australians airmen in the RAAF/RAF England. At the end of 1943 there were 15,000 Australian airman serving in the air war against Germany and Italy. There were eighteen Australian Sqns in the European War.

The best military book available for research RAAF operations Europe  WW2. First published 1954 and this is the 1962 first edition. Interesting to see that they have used the exact same format as the WW1 Bean History Books - that is giving personal details of soldiers/airman at the bottom of page. That's a real help with WW2 medal research. Fully indexed, 80 printed photos and 30 maps.