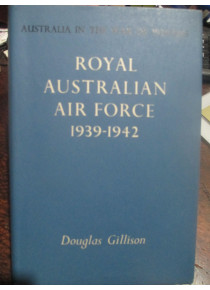 Royal Australian Air Force 1939- 1942 ' by Douglas Gillison . Lists the activity or history of the RAAF in the air war against Japan . This is the Official History of Australia in World War 2 Volume 1 of the Air War Series 3. It describes particularly the experiences and achievements of Australian airman units and members of the RAAF .First published 1962 and this is the first edition.  Fully indexed, 60+ printed photos and 40+ maps.

This volume is concerned mainly with the air war against Japan from December 1941 to the end of the first quarter of 1943 when air superiority was first wrested from the Japanese. It describes particularly the experiences and achievements of the Australian airmen who fought as integrated RAAF units or as members of units of the British and American air forces in Malaya, Burma, the East Indies and under General MacArthur in the South–West Pacific. In both time and geography the scope is wide. The opening chapters describe the genesis of the Royal Australian Air Force, its history between the wars and the problems of the development of the force in Australia and the Far Eastern theatre before the Japanese onslaught opened.