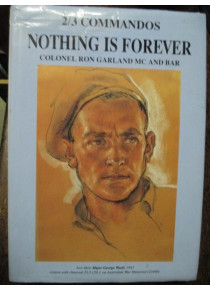 Nothing is Forever the History of 2/3 Commandos Squadron /Independent Company by Colonel Ron Garland MC and Bar. ﻿

Nothing is Forever the History of 2/3 Commandos Squadron /Independent Company by Colonel Ron Garland MC and Bar.
This history of the 2/3 Commandos (formerly known as 2/3 Independent Company 1941-43) records their operations against the Japanese in WWII, in Papua New Guinea in the Wau to Salamaua region. Also gives the history of the beginnings of the commando unit and  their service in New Caledonia and in Kalimantan.
Importantly the history includes an honour roll, a bibliography and a glossary. Numerous named photographs support the large detailed narrative. The author was a section commander with the 2/3 Commandos and was twice awarded the Military Cross medal.

”They fought over long periods, through ambushes and booby traps over almost impenetrable, rugged jungle-covered mountains and they captured fortified Japanese positions. Although ravaged by malaria, typhus, dysentery and appalling battle casualties, they grimly fought on until victory was theirs.” B Harris MSc BSc UNSW﻿