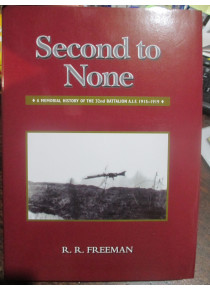 32nd Second to None Memorial History of 32nd Battalion AIF

Second to None 32nd Battalion History by R Freeman. The author, Roger Freeman after a visit to the Western Front was spurred on to write a 32nd history, knowing that the 32nd was the only WW1 Infantry Battalion composed predominantly of South Australians whose history had never been written.
A huge concise Memorial History to the Australian 32nd Battalion during WW1. If you are interested in the 32nd Battalion this is the only book you will require, without doubt there is no other book or other media ever printed that offers more details of the Battalion and men. It is a pleasure to be able to offer such a remarkable book - a master collection of all matter relating to the 32nd Battalion  - superb presentation hard cover dust jacketed, anti age high quality paper.
The book has an astounding collection of member photographs both individual and
groups (there is even a lift out printed photo that could be framed).
Appendixes include many member lists including:
Honour Roll
Nominal Roll
Date of Death
Honours and Awards
Citations and Recommendations
Reinforcements to the Battalion
Personal Photo Index

The 32nd Battalion was raised at Mitcham, a suburb of Adelaide, on the 9th August 1915. Only two companies were raised from South Australian enlistees - with two companies formed in Western Australia and joined the battalion at the end of September 1915. The battalion left for the Great War from Adelaide on the 18th November 1915.

In Egypt, the battalion became part of the newly raised 5th Australian Division, they sailed to France in June 1916. The 32nd Battalion fought its first major battle at Fromelles on 19 July 1916, having only entered the front-line trenches 3 days before. The attack was a disastrous introduction to battle for the 32nd - it suffered 718 casualties, almost 75 per cent of the battalion’s total strength, but closer to 90 per cent of its actual fighting strength. Although it still spent periods in the front line, the 32nd played no major offensive role for the rest of the year.

In early 1917, the German Army withdrew to the Hindenburg Line allowing the British front to be advanced and the 32nd Battalion participated in the follow-up operations. The battalion fought with distinction in 1917 during the Battle of Polygon Wood.

The 32nd Bn fought its last major action of the war between 29 September and 1 October when the 5th and 3rd Australian Divisions and two American divisions attacked the Hindenburg Line across the top of the 6-kilometre-long St Quentin Canal tunnel; the canal was a major obstacle in the German defensive scheme.