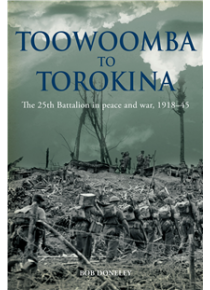 After the 1st World War, the defence of the Australian mainland lay with the part-time soldiers of the Citizens Military Force (CMF), also known as the Militia.﻿

If you are after the 2/AIF 25th Battalion History Click here.

In﻿ 1942 Australia faced its greatest peril as Japanese forces advanced rapidly southward. The Philippines, Hong Kong, Malaya, Singapore and Indonesia had all fallen and the only land mass of significance between the Japanese and Australia was the island of Papua and New Guinea. If it fell, Australia, too, would eventually fall, effectively delivering the entire south-west Pacific into Japanese hands. With the Australian Imperial Force (AIF) fighting in North Africa or entering captivity in Singapore, the defence of New Guinea fell to a handful of Militia units. These units, a mix of pre-war volunteers and conscripts, were given the task of defending the approaches to Port Moresby, New Guinea’s capital city. While most Australians are aware of the defence of the northern approach to Port Moresby over the Kokoda Track, few are familiar with the earlier battle to defend the eastern approach through Milne Bay. Without the battles of Kokoda and Milne Bay, Port Moresby would have fallen and with it, New Guinea.

Similar to Kokoda, the initial Japanese thrust at Milne Bay was met and halted by the untried Militia troops. Later experienced AIF battalions then counter-attacked and drove the Japanese back, securing Port Moresby, New Guinea — and Australia itself. One of the Militia units that held the Japanese at Milne Bay was the 25th Battalion from Toowoomba and the Darling Downs, originally raised prior to the First World War. From Milne Bay, the 25th Battalion went on to fight in Bougainville, clearing the Japanese from one of their last strongholds north of Australia.

Toowoomba to Torokina traces the proud history of the 25th Battalion from the end of one war to end of the next. It tells the story of the men from Toowoomba and the Darling Downs who answered the call to fight a war that would threaten their country’s very existence. Like their First World War predecessors, they fought a determined foe in hellish conditions with, as the Battalion’s motto decrees, ‘Never a Backwards Step’.

A Roll of Honour, full all members Nominal Roll, Honours and Awards complete this valuable History.