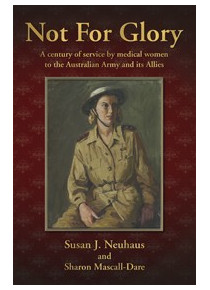 Not For Glory A Century of service by medical women to the Australian Army and its Allies by S. Neuhaus, S. Mascall-Dare

This book takes the reader on a historical journey through 100 years service with the medical Women of the Australian Army.

The Australian Army did not permit the enlistment of female doctors until the Second World War. However, during World War I at least 14 female doctors served overseas as military doctors.

From the trenches of the Western Front to the ricefields and jungles of South-east Asia, Australian women have served as doctors and medical specialists from World War I until the present day.

This book tells their stories of adventure, courage, sacrifice and determination as they fought to serve their country … and won.﻿

The author, Susan Neuhaus is a Surgeon with a 20 year military career.
She served in Cambodia, Bougainville and Afghanistan.

Her co-author, Sharon Mascall-Dare﻿ is a Military Public Affairs Officer and an Adjunct Associate Professor of Journalism UOC.