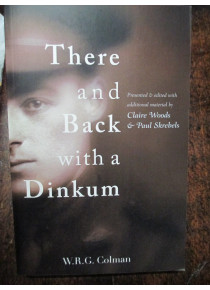 There and Back with a Dinkum
By W.R.G. Colman, Edited by Claire Woods and Paul Skrebels﻿ : new book

There and Back with a Dinkum By W.R.G. Colman,
Edited by Claire Woods and Paul Skrebels

While not a Battalion History it is a remarkable account of a young university student who enlisted in the 27th Battalion AIF in WWI.
After 80 years, Colman's words now come to life, with commentary from two leading South Australian military historians.

'This book is intended to be a plain, straightforward account of the experiences of an Australian soldier during the Great War.' So says its author, Russell Colman, who served as a private, NCO and officer in the 27th Battalion, Australian Imperial Force, from 1915 to 1919.
But as his service record suggests, there is nothing ordinary about There and Back with a Dinkum.

Presented here for the first time, after lying unpublished in the Australian War Memorial's archives for almost eighty years, this is the remarkable story of a young university student who enlists to 'do his bit' during those 'lost' years. In the persona of his narrator, John Carlton, Colman journeys from schoolboy cricket captain in Adelaide to infantry officer on the Western Front, where he is twice wounded and awarded the Military Cross for gallantry. A thoughtful and intelligent writer, he tells what it means to be a civilian in a soldier's world.