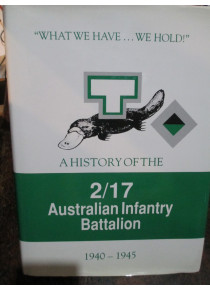 The 17th Battalion 2AIF was reformed at the Ingleburn Army Camp near Sydney NSW.
In October 1940 the Battalion embarked for Middle East. The Battalion fought at Tobruk, El Alamein and was then recalled to protect Australia from Japanese advances. It formed part of the first amphibious landing since Gallipoli at Lae and Finschhafen. ﻿
The Battalion fought in the South West Pacific the rest of the war and was disbanded around 6 years after being formed.

The History is complemented by a full Nominal Roll, Honours and Awards Roll.