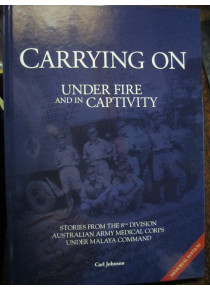 Carrying On Under Fire and in Captivity Stories from the 8th Division Australian Army Corps under Malaya Command by C. Johnson

Churchill reported the Fall of Singapore as the "worst disaster" and "largest capitulation" in British military history with around 80000 soldiers becoming POWs﻿ on the day of surrender alone, 15th February 1942.

The whole of Australia's 8th Division surrendered including the 1800 members of the Australian Army Medical Corps. This is the story of those men and women who were forced to endure life as prisoners of war, following the Fall of Singapore. ﻿

Not only their tragic times as POW but also stories, diary entries and reflections of over sixty medical men and women who, during the time of heavy fighting in Malaya and Singapore, tended their wounded comrades.

A magnificent Memorial Book a great credit to the Author. We doubt that you will obtain a more interesting concise book about the Medical Corps in Malaya and later on the infamous Thai Burma Railway and other slave POW Camps in Borneo (Sandakan), Japan and Manchuria. The experiences of nearly 200﻿ nursing staff are covered.

The main units covered include but is not limited to;