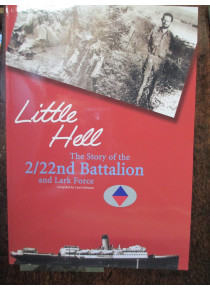 Story of the 2 22nd Battalion and Lark Force

Little Hell The story of the 2nd 22nd Battalion and Lark Force.

A concise history book about the  2AIF 22nd Battalion and the attached units of Lark Force which were sent in 1941 to Rabaul New Britain to defend the island from Japanese attack.

The Japanese assault took place on 23rd January 1942 it was the first attack on Australia territory. Its a story of the 1500 men who fought bravely and inflicted heavy casualties on the enemy. However, Lark Force was left with no naval support and only a few aircraft, and no help forthcoming, they were soon overwhelmed by the superior Japanese force.

Upon surrender about 150 soldiers were massacred by the Japanese.
A further 300 would escape the cruel POW treatment. About 6 months after becoming POW much of the remaining men were taken from Rabaul and were never heard of again.
The mystery is also explored in this book with new information that the prisoner ship was probably sunk and could have been the Montevideo Maru.

In this large book you will find a virtually unlimited amount of personal accounts, diaries, detailed named nominal rolls  and numerous personal photographs of the men. includes many interesting chapters like the
22 Battalion reunions and pilgrimages.

Please feel free to email if you would like us to check if the person who you are researching is listed in the book.