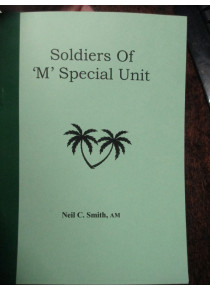 Soldiers of M Special Unit by N. Smith AM

This Special Forces unit was formed in 1943, as a successor to The Coastwatchers. M Special Unit's role was focused upon obtaining intelligence on Japanese operations.

Small teams from the unit were landed behind enemy lines by sea, air or land, in contrast to its counterpart, Z Special Unit ("Z Force"), which became well known for its direct-action commando-style raids.﻿
This 40 page booklet has a short 13 page overview history of the unit.
Balance is detailed nominal roll of the unit with remarks.