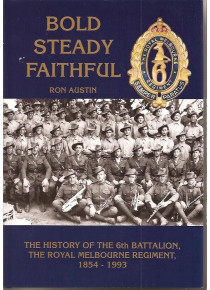 The traditions of the Australian Army stretch back as far as 1854, when this regiment was formed as a result of the Russian scare and the Eureka troubles.

The book traces the unit's history over 140 years, including its involvement in both World Wars. Among its illustrious members are men who rose to general rank such as Julius Bruche, Gordon Bennett, Roy Gordon and Pompey Elliott.