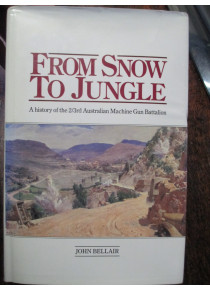 From Snow to Jungle  A History of the 2/3rd Australian Machine Gun Battalion. by J Bellair﻿﻿

From Snow to Jungle tells the story of the 2nd AIF 3rd Australian Machine Gun Battalion in the 1939-1945 war. John Bellair was a member of the Battalion towards the end of the war.

The Battalion was formed in South Australia in June 1940 and its first Commanding officer was Arthur Blackburn, an Adelaide solicitor who had won the Victoria Cross at Pozieres in 1916.  In April 1941 the Battalion was sent overseas to join the 7th Australian Division in the Syrian campaign against the Vichy French.  Allied success in this campaign, in which the Battalion played an important part, denied the Axis forces a base from which to attack the British in North Africa and Palestine. In February 1942, as a political gesture to the Dutch, the Battalion was landed at Batavia in java and became part of a tiny Allied force which held up a Japanese Army Corps for two days at Leuwiliang near Buitenzorg.

Those who survived became POW. Most of them worked (and many of them died) on the infamous Burma railway. Some members of the Battalion were able to reach Australia where the Battalion was re-formed and in 1944-45 fought with the 7th Division as infantry in the final long and exhausting Aitape Wewak campaign in New Guinea.

Two hundred and two members of the battalion gave their lives. It is to honour them and to record the achievements of a distinguished Battalion as well as some of its humour and tragedy that this history has been written.

The detailed text is supported by numerous photos with a full nominal roll in conclusion.