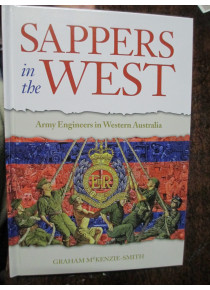 Sappers in the West - Army Engineers in Western Australia

Sappers in the West - Army Engineers in Western Australia﻿ by G. McKenzie Smith﻿

Sappers in the West

In 2012 the WA Sappers of 13 Field Squadron celebrated 100 years of service. The only unit in the Australian Army created in the Kitchener Reforms of 1912 that is still serving today. The Royal Australian Engineers of WA dedicates this history to the memory of all Sappers who have paid the supreme sacrifice in the service of the  country - of which 345 were known to be West Australians.﻿This military book is a detailed study of WA Sappers throughout all wars.

History of the WA Sapper Units from the early colonial periods and expands with the commencement of the Great War WW1. There are sections including about the various WW1 battles where the Sappers were active and in particular history of some unusual units like the 3 Tunneling Company and 5 Broad Gauge Railway Operating Company.
The book has 100 pages devoted to WW2. Vietnam War receives full mention and then follows with the achievements of the current WA Sapper units up to 2013. Consideration is also given to the RAE associations.