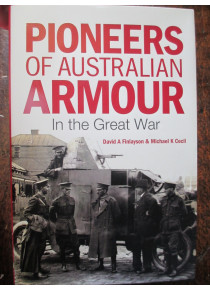 Pioneers of Australian Armour in the Great War by D. Finlayson & M. Cecil﻿

Pioneers of Australian Armour in the Great War

This war book is a history of the units and men of the little-known Australian Armoured Car later known as the 1st Australian Light Car Patrol 1915-19 and also the Special Tank Section, AIF formed in 1918. These were the only Australian Army mechanised units of WW1.

The book also has many biographies and photographs of the men who served in these units. The interesting narrative is supported by many illustrations from unique photographic Collections.

The appendices include a statement of casualties, nominal roll of tank personnel 1918 and various other roles of soldiers connected with these units, notes on tank driving extracts from the training note number 2 Tank Drivers Handbook Mark I,II and IV type tanks.﻿