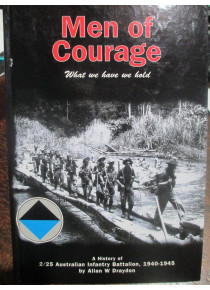 25th Men of Courage HISTORY OF THE 2/25 BATTALION

Men of Courage a HISTORY OF THE 2/25 AUSTRALIAN INFANTRY BATTALION ' by ALLAN DRAYDON .

Men of Courage a HISTORY OF THE 2/25 AUSTRALIAN INFANTRY BATTALION ' by ALLAN DRAYDON .
This is the history of the 2nd 25th Battalion AIF which took part in battles in the Middle East Syria 1941, then on to the Kokoda Track , Buna Gona , Lae , Shaggy Ridge Ramu
Valley and finally Balikpapan . The first edition of this book was published
in 2000 and this is a direct reprint completed in 2001 of that first edition.
This is a full Battalion History which starts with the initial set up of the
Battalion in July 1940 and ends when the Battalion ceased to exist on the 13th
December 1945. In between those two events there are 270 pages of information
relating to the members and their battles. A Queensland Battalion it was made
up of men from Sunshine Coast , Brisbane and Darling Downs . A large Battalion
History lavish in both text and named soldier pics. Important addition to the
research library of any serious medal collector and/or military historian. Nominal
Roll Honours and Awards Roll in detail. Indexed