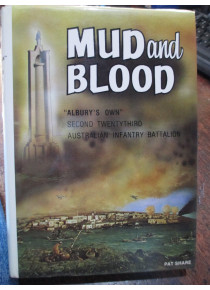 In August 1940, World War II necessitated the formation of the 2/23rd Infantry Battalion at Albury in New South Wales. By November 1940 the Battalion had sailed to the Middle East. Elements of the Battalion took part in North African campaign before being forced back to defend Tobruk. The Battalion defended Tobruk for 8 months before being transferred to Palestine and then Syria. The Battalion had to be rushed back to North Africa when German and Italian forces reached El Alamein. The Battalion took part successful offensive at El Alamein. But in January 1943 were withdrawn from North Africa to participate and defend Australia each was under Japanese threat.
They were quickily reformed and sent to the New Guinea front line the first battle being an amphibious landing at Red Beach near Lae New Guinea.
The Battalion fought around Lae, Finschhafen, Sattelberg and inland of these locations﻿. After which the Battalion returned to Australia in February 1944. After leave the Battalion then undertook amphibious landings on Borneo at Tarakan﻿.

The history book completes with a nominal roll with service details of members, also included are Honours and Awards Roll, The Honour Roll and detailed index.﻿﻿
﻿