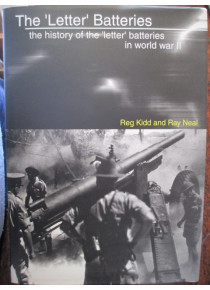 History of the Letter Batteries Australian Army Artillery in WW2

The 'Letter' Batteries the History of the Letter Coastal Artillery Batteries In World War II by R Kidd and R Neal : new book﻿

This artillery history book is the story of the Australian Army coastal artillery batteries that were positioned to defend Australia's ports. When General MacArthur took full control over the defence of Australia one of the first necessities he undertook was to examine the defenses of Australian ports. He wanted to ensure that they were appropriately defended to protect the men and war materials that he was about to bring through the Australian ports.

This is the story of the raising of 19 batteries Coast Artillery of the Australian Army. They were equipped with 155 mm artillery guns and 150 cm searchlights - all equipment was supplied by the USA.

As the Japanese attack faltered and Allied forces took the offensive, these coastal batteries (which later became known collectively as the Letter Batteries, as they were alpha coded.) being quite mobile were moved forward to defend bases in Papua New Guinea.﻿